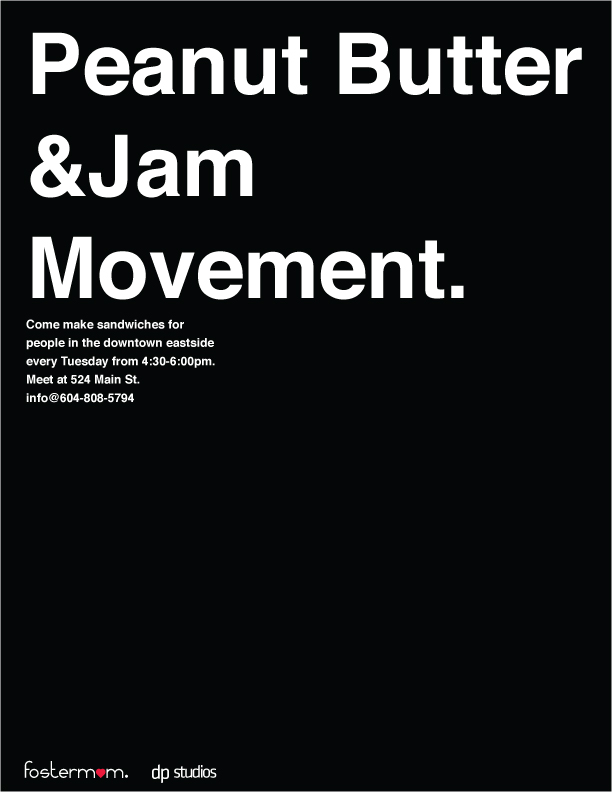 Saving the world is so simple: when two slices of bread meet with caress crushed peanuts
and jarred berries
something profound is born.

In grade school Ben offered me one
if I would play with him at recess.
I couldn’t refuse;
it was Texas toast and crunchy yum-ness, whole wheat pleasure.

And hey,
we’re still friends today,
but now we make Pb and J’s
for other people, to make their day and bring them together
like peanut butter and jam.

In 2008, I moved from the suburbs to Vancouver. Upon my arrival I was struck by the visibility of rampant poverty and social marginalization everywhere. While reflecting on this I wrote a poem about an elementary school experience where a classmate offered me a peanut butter and jam sandwich. The poem explained how such simple and generous acts could emancipate the world from adversity. After writing the poem I contacted the old classmate and invited him to join me in making sandwiches and distributing them in Vancouver’s impoverished downtown eastside. We began doing this weekly and opened it to the public and people in our age group who might not know about the harsh realities of life in the downtown eastside. The project soon became known as the Peanut Butter and Jam Movement. I toured people through the eastside, encouraged them to help out in any way they could, and shared information about the Anti-Poverty Committee, the organization I was volunteering for at the time.

In 2008 I wrote:    “It’s important that youth start getting involved and peanut butter & Jam is a good start. Its simple affordable and doesn’t not take much time. Its practical and that people involved get an immediate reward from people’s thankfulness and they build a sense of awareness for the human beings that need our help and the fact that they are real people and a relationship starts being built. People start caring more. So in the most blatant terms the Pb & J movement is a movement towards taking action in general.”