One Minute Windows into Microscopic Words 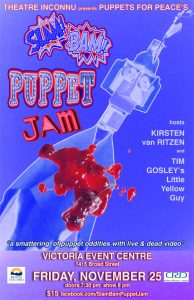 Throughout the Fall of 2016, I began taking on work as a puppeteer as part of my exploration and embodiment of the character Herman Rupert for my work in animating the exhibition: Carol Sawyer: The Natalie Brettschneider Archive.

In this performance Herman Rupert teamed up with local Victoria, BC puppeteer, Julie Gennai, in order to re-tell the short stories of Richard Brautigan through shadow puppetry.