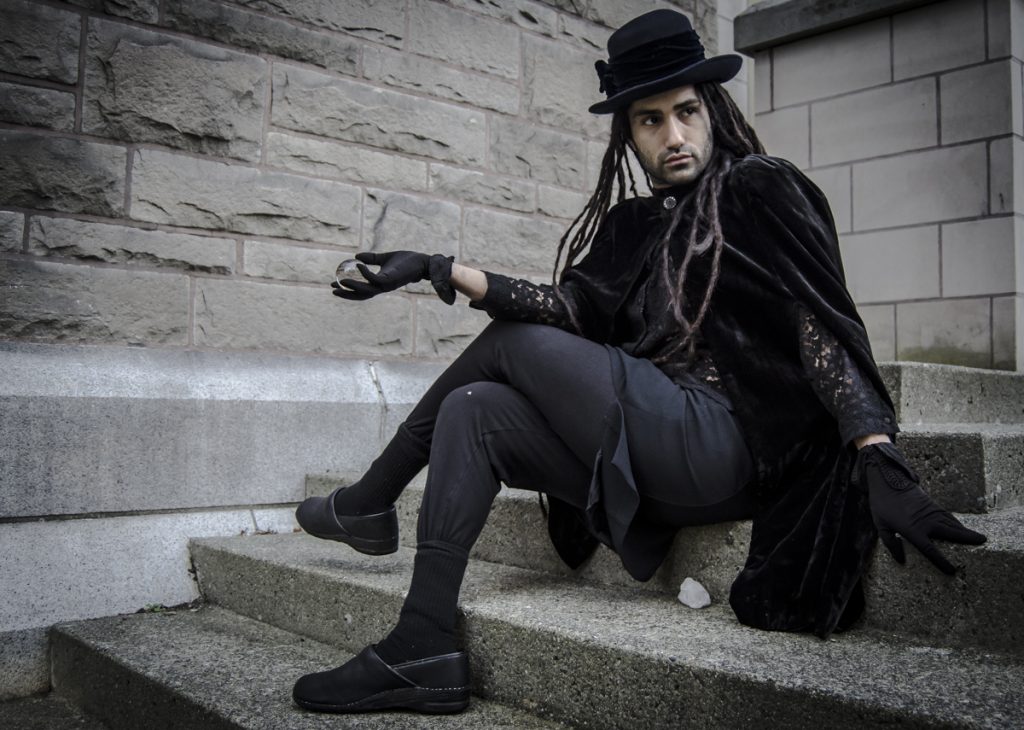 Character Bio: Spell-Castanova (Born 21 February 1982) is an eclectic witch and ex-con from Eugene, Oregon. He is the devoted henchman of wrestler the RingBleeder ever since meeting her at the Western Flags Circus in 1999. He initially joined the circus after being kicked out of Oregon State Penitentiary in 1998 for conjuring a race riot and overextending his legal right to read the bible. Within the circus, he performed in the Mystical Curiosities Showcase where he felt his visual appearance and powers would be celebrated. According to Witchcraft & Wicca Magazine (2002): “his ability to craft hypnotizingly beautiful costumes makes him a most debonair addition to any magic fair.” Furthermore, his powerful gaze and calming eyes can trap opponents and defuse their focus by instantly evoking a burning bodily desire. Spell-Castanova was rated Most Aesthetically Majestic Witch at the 2003 Northwest Magic Conference and again in 2011.

Explanation: The way I conceived of this character was as an overly exaggerated signifier of all that the West Coast League of Lady Wrestlers (WCLOLW) event ridiculed and stood in resistance to. It occurred to me that in entertainment wrestling, women most commonly play a supporting role and are treated as sexual objects. Thus, as a self identified male creating a character for the WCLOLW, I wanted to make a mock supporting role, and commit myself to being a sexual object. However, Spell-Castanova is not a stereotypical macho male sex-object, but rather, he is a well cultured man of many talents. He is a male temptor who utilises his mysterious demeanour, charm, and sense of fashion in order to seduce women. While he seems to possess an admirable integrity, his greatest magical power is that he is a master of manipulation. Spell-Castanova exploits the vulnerabilities and insecurities of his prey in the guise of good and honest intention. Once Spell-Castanova taps into the weaknesses of his victims, he offers an undeniable opportunity for healing, whether it be through raising self worth, or teaching forbidden magic. Once he has healed them temporarily, or fulfilled a void, he then fulfills his carnal desires and proceeds to cast his victims back down into deeper and darker shadows.

Inspired by the spectacle that is inherent to professional wrestling, we are an art collective formed in celebration of feminine identities and subversion of traditional gender roles and expectations.

The League Of Lady Wrestlers was founded by artists with a common desire to explore the intersections between performance and the male gaze in visual culture. The West Coast League Of Lady Wrestlers is the newest baby sister of our wild, weird and wonderful family. Compiled by artists from various backgrounds living on Vancouver Island and the British Columbia Mainland, we collaborate to craft our performances in the spirit of spectacle sports, humour and the accessibility of art.